Strong north to north-westerly winds will lash the South West Land Division of Western Australia on Monday as a low and cold front approach the region.

A band of heavy rain and thunderstorms are expected to accompany the frontal system, with widespread falls of 20-40mm expected, isolated heavy falls above 50mm possible.

Thunderstorm activity may develop with the initial band during Monday, with further storm activity likely into Tuesday as an upper cold pool moves into the region. A couple of these storms may become severe with damaging wind gusts and small hail.

A secondary front is likely to move across the area during Wednesday, reinforcing gusty south-westerly winds and showery conditions across the south-west of the state. 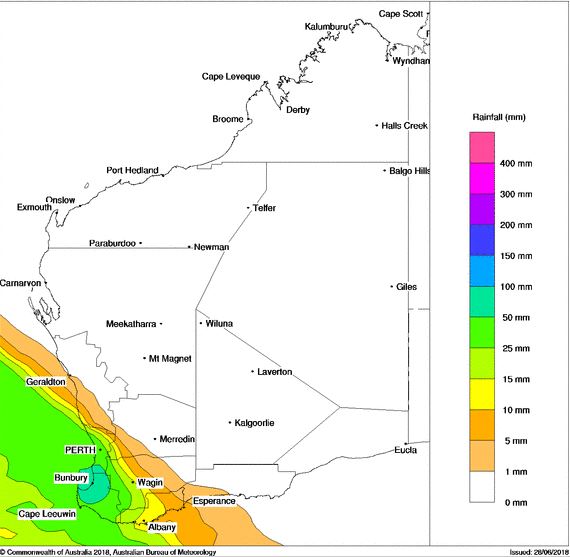 A cold front pushed through central parts of NSW today, causing temperatures to plummet as well as bringing gusty winds and thunderstorms to some areas.

The day began balmy for some, with Sydney and Cessnock reaching a top of 20 degrees, and Williamtown 21 degrees, three degrees above average for this time of the year.

However as the change moved through temperatures plummeted as showers and thunderstorms pushed through, accompanied by gusty winds on their arrival.

In the Blue Mountains, the mercury only struggled to reach a maximum of 8 degrees due to cloudier skies earlier in the day, however as the change swept through it dropped to 4-5 degrees with the apparent temperature falling below freezing.

Sydney radar at 4:30pm EST, showing a band of rain and thunderstorms across the region 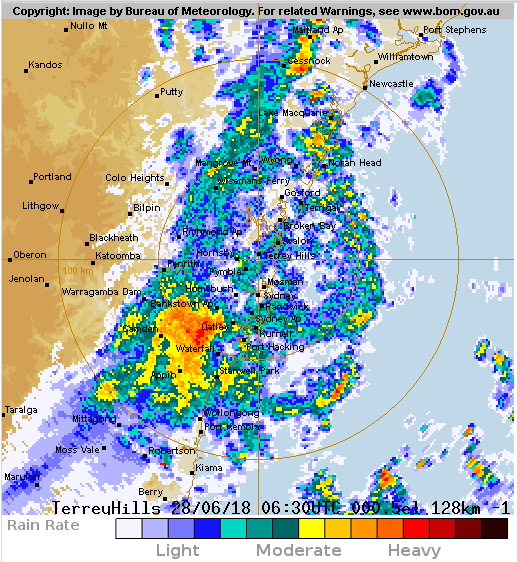 Parts of Queensland shiver through their coldest day of the year

Brisbane hit a top temperature of 16.9c degrees on Wednesday which is 5 degrees below the June average of 21.9c. Toowoomba airport also limped to a top of just 12.1c.

On Thursday, conditions have warmed up slightly across the region with maximum temperatures reaching into the late teens and early 20s for many locations.

Temperatures are expected to reach into the low to mid 20s during Friday, and into the weekend before slightly cooler conditions arrive early next week with a possible rain band. 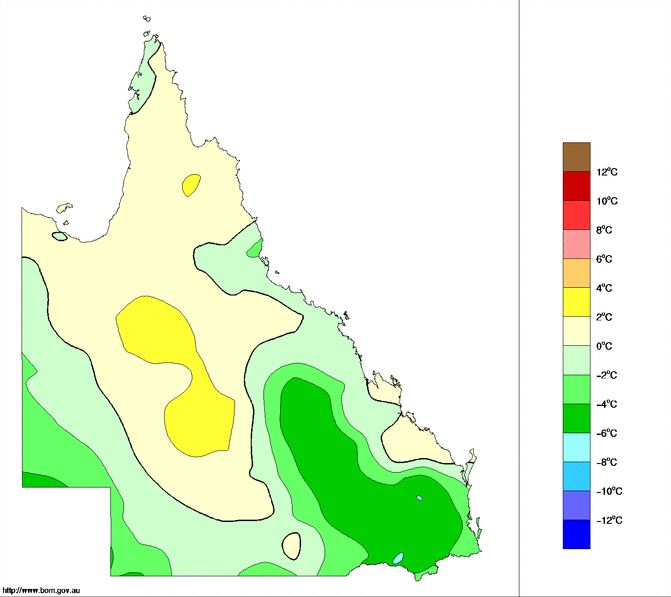 While all 5 events affected NSW in varying ways it was the event from June 7th through 10th that was the most serious. This system crossed the NSW coastline around Newcastle with major flooding across the Hunter Valley (Paterson, Williams and Hunter Rivers), while flash flooding occurred in Newcastle and the Central Coast. The highest 24 rainfall total to 9am on the 9th of June 2007 was 293.6mm at Mangrove Mountain (Central Coast).

Damaging to locally destructive winds were observed with Newcastle recording a 124km/h gust while Norah head recorded the strongest gust at 135km/h. While the 76,000 tonne bulk ore carrier, Pasha Bulker was left grounded on Newcastle Beach as large swells battered the area.

Over 200,000 homes lost power across the region due to high winds and flooding with 9 fatalities.

6cm of snow closed the New England Highway in Murrurundi-Tamworth area on the Northern Tablelands. 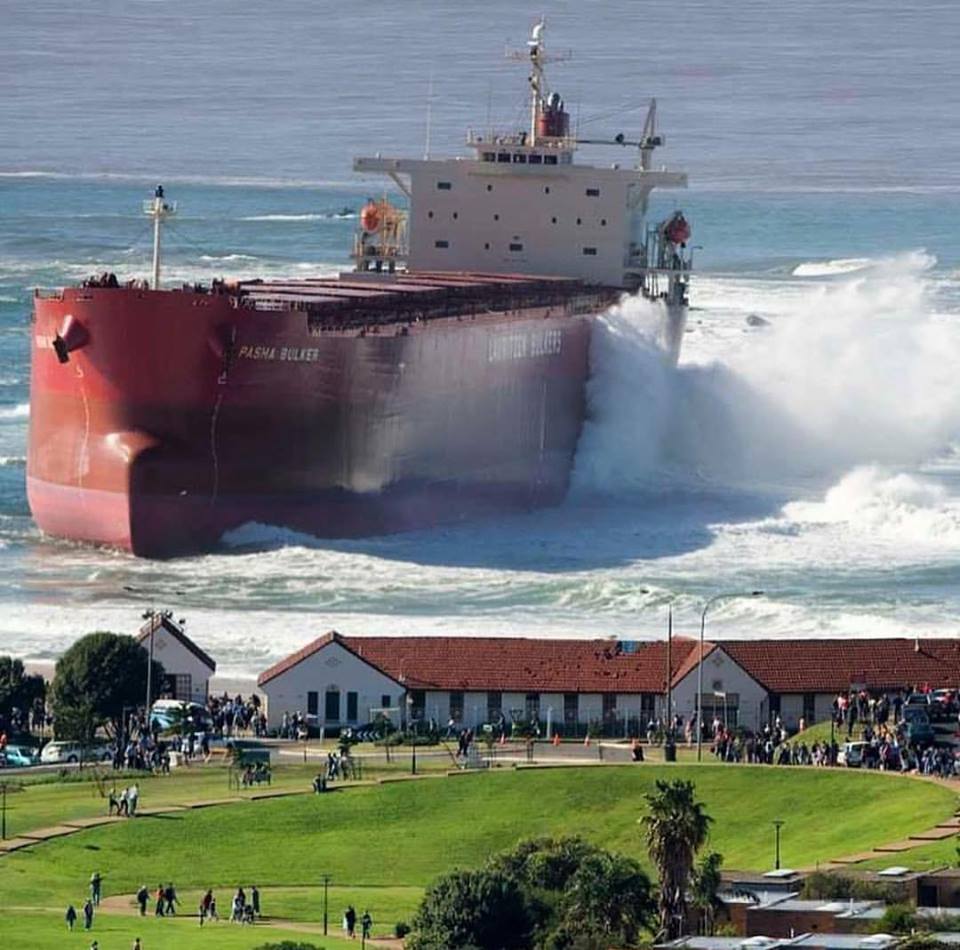 After a dry start to Winter some welcome rainfall is likely to develop across inland parts of NSW and QLD over the next few days.

An upper trough will shift east today and slowly weaken over the coming days. This upper trough is expected to generate light patchy rainfall and isolated thunderstorms with its passage.

Four-day totals of 15-30mm are possible with isolated heavier falls of up to 50mm possible. The bulk of the rainfall is expected to peak during Wednesday when 10-20mm is likely, particularly with isolated thunderstorm activity.

While not drought breaking, it will be a welcome sight for rain starved locations. Next weekend early indications are hinting at the potential for a secondary system to move across the region with further patchy rainfall possible. 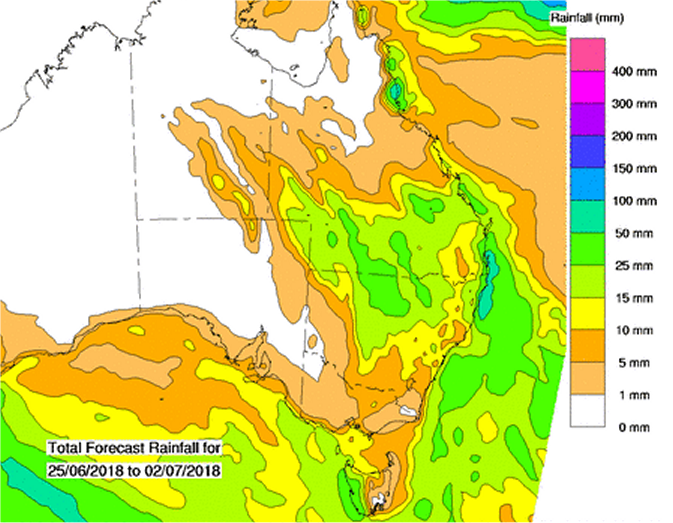 Much needed rainfall has soaked parts of central-east New South Wales in the past 24 hours, bringing the best rain in months to some areas.

A coastal trough combined with strong and gusty southerly winds to generate the showers, which produced widespread totals of 30-to-60mm (with isolated totals towards 80mm), most which fell on Tuesday afternoon/evening and overnight.

Sydney recorded 43mm in the 24 hours to 9am, its heaviest fall since March, whilst Newcastle recorded 54mm, its best rain since early April.

This has been great news for this part of the coast, which like many other parts of the country experienced a very dry start to the year. June is now the first month of the year Sydney has at least reached its monthly average, whilst some coastal parts of the Hunter have now recorded more than double their June average rainfall.

The rain and wind also led to the coldest conditions seen so far this winter, with many areas hovering between ten and twelve degrees most of the day, with wind chill making it feel several degrees colder.

Conditions will dry up over the next few days, before showers return early next week.

Image: Rainfall totals in the 24 hours to 9am today across the Sydney Basin (Source: Bureau of Meteorology)

Australia has been put on an El Nino Watch, according to the latest El Nino-Southern Oscillation (ENSO) Wrap Up released by the Bureau of Meteorology today.

Whilst ENSO conditions are currently neutral, the eastern Pacific Ocean have continued to warm, a trend observed since April. However, warming has also been observed below the surface of the tropical Pacific, which is a good early indication of an El Nino event.

Computer models are also favouring the development of an El Nino event, with five of the eight models forecasting ocean warmth to reach thresholds by spring. As a result, the probably of an El Nino has been increased to 50% (considered an El Nino Watch).

El Nino events are well known to slacken the trade winds across Australia, bringing below average rainfall and above temperatures (due to reduced cloudiness) to the country, especially northern and eastern areas.

Given an already very dry and warm start to the year, this is bad news for farmers as increasing parts of the nation become drought declared, whilst others have seen their drought conditions worsen.

See the Bureau of Meteorlogy?s El Nino outlook at https://www.bom.gov.au/climate/enso/ 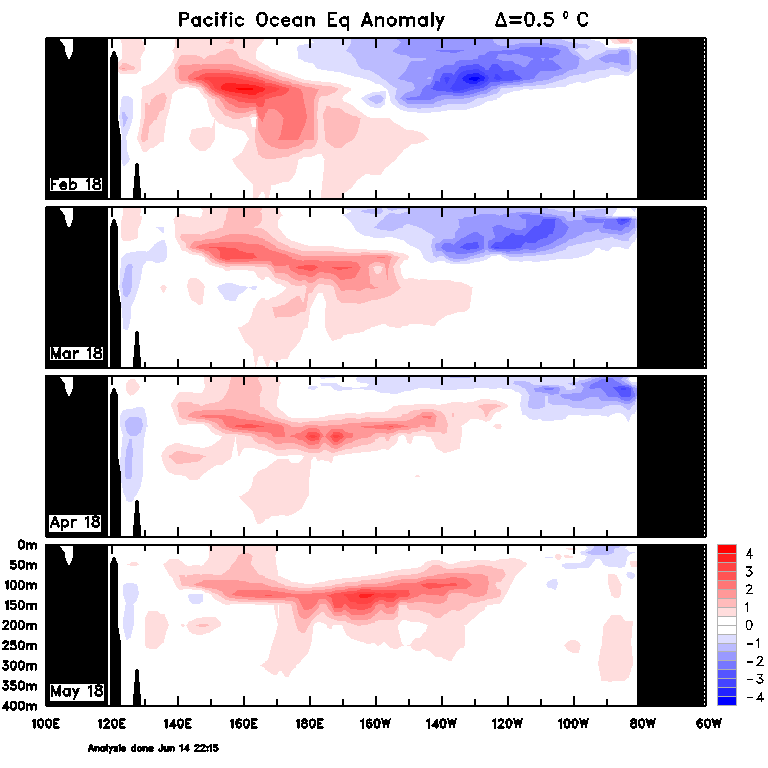 Parts of Queensland experience coldest night of the year

A very cold airmass thanks to a complex low in the Tasman Sea has continued to drift north over the last 24hrs affecting parts of southern Queensland.

Oakey on the Darling Downs recorded the coldest minimum across the state with a staggering -4.9 just before 6am. Other notable overnight lows included: Wellcamp Airport -4.1c, Kingaroy -3.5c, Roma -3.4c and Beaudesert -1.6c.

Maximum temperatures are likely to struggle during the day with cooler south westerly winds moving into the region. Highs in the mid to late teens are expected across most regions of southern Queensland with Stanthorpe heading for a top temperature of just 10 degrees.

Minimum temperature for Queensland on the 18th June, 2018 (Source: Bureau of Meteorology)

What ingredients are required for thunderstorm development?

Fascinated by how thunderstorms develop? Ever wondered what the ?key? ingredients are for severe storms?

For the atmosphere to produce thunderstorm activity, four major ingredients are required. Here is a handy little acronym to remember: S.L.I.M.

S is for Shear: Winds that change in speed and direction in the atmosphere at different heights.

L stands for Lift. A frontal boundary or trough system. Basically, two masses of air that collide and cause the air to lift. A perfect example is what we call a dryline. Dry west to south-westerly winds meeting a more moist east to north-easterly flow, and where these two collide the air is forced to rise.

I for Instability. Where a parcel of air is warmer that it?s surrounding air and rises under its own buoyancy. Sounds complicated? If I was to boil a pot of water and put the lid on, then once boiled, remove the lid and watch how rapidly the steam rises towards the ceiling. That air is hotter than the surrounding air, therefore allowing it to lift.

When you put all these ingredients together, the recipe becomes ripe for thunderstorm development. That is when mother nature puts on a truly amazing show! 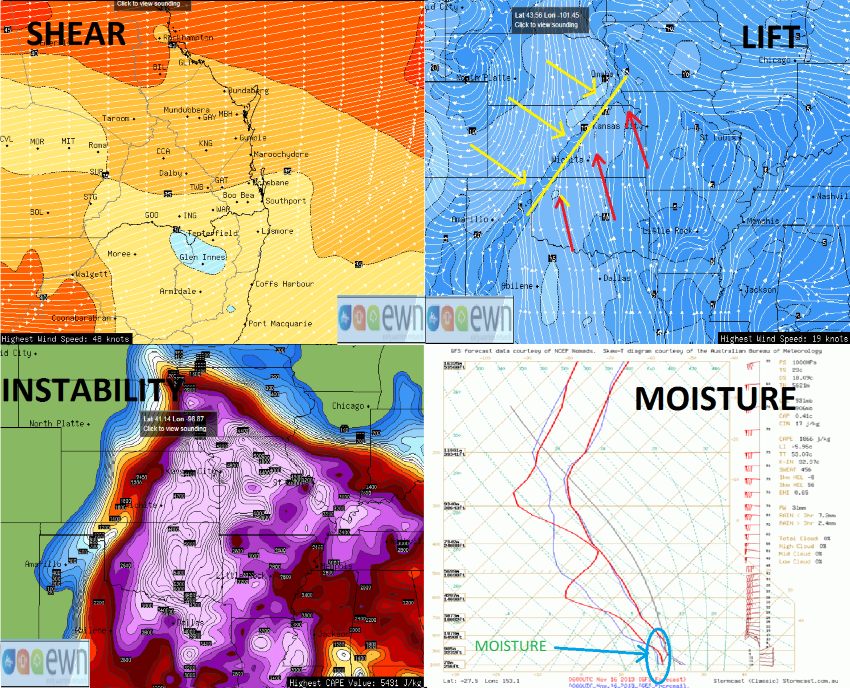 A vigorous northerly airstream has battered south-eastern Australia over the last 24hrs ahead of a cold front, bringing wind gusts in excess of 140km/h in alpine areas.

Thredbo felt the brunt of the winds hovering around the 100km/h mark for close to 3 hours with peak gusts reaching 141km/h right on 1:30am this morning.

Perisher experienced gusts exceeding 90km/h, while over the border in Victoria Mt Hotham received a 100km/h gust early this morning, with sustained winds above 90km/h for nearly 7 hours.

A severe weather warning remains in effect across these region, however conditions should gradually ease during the afternoon and evening 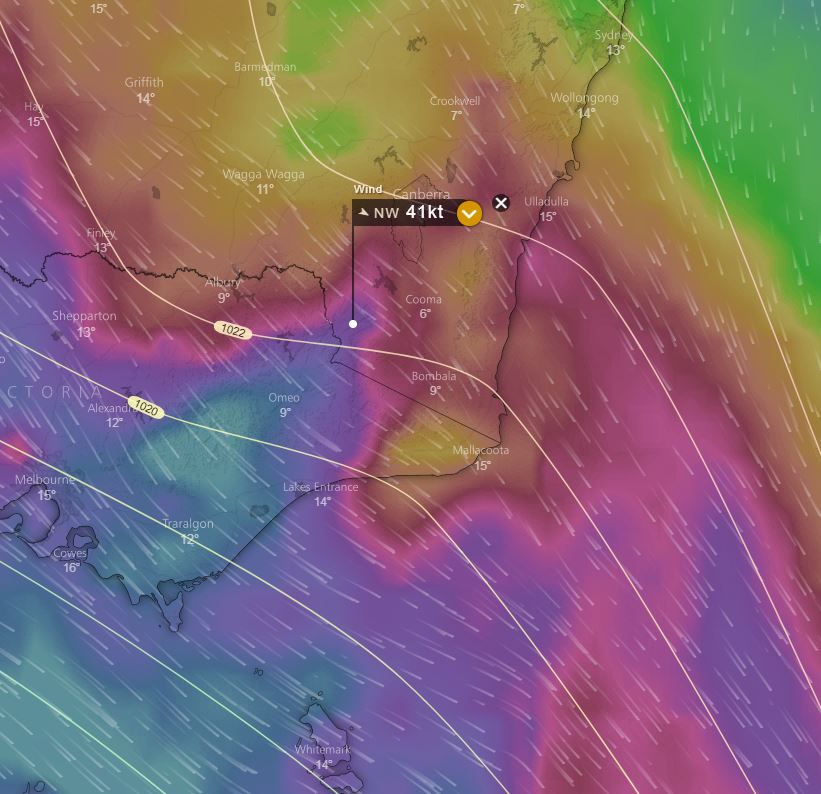 Onshore winds and a developing coastal trough have delivered much needed rainfall for the east coast of NSW during the last few days.

Elsewhere, widespread totals 25-50mm have fallen across coastal parts of NSW during the last 24hrs, with Bodalla on the South Coast recording 52.9mm and Comboyne on the Mid North Coast picking up a much welcomed 65.5mm to 9am today.

While further heavy coastal showers and isolated thunderstorms will persist for the remainder of today and into Thursday morning, activity should slowly shift north during the next 24hrs.

The rainfall is very welcome across the region due to dry conditions over the last few months, although the rain is unfortunately not spreading far inland. 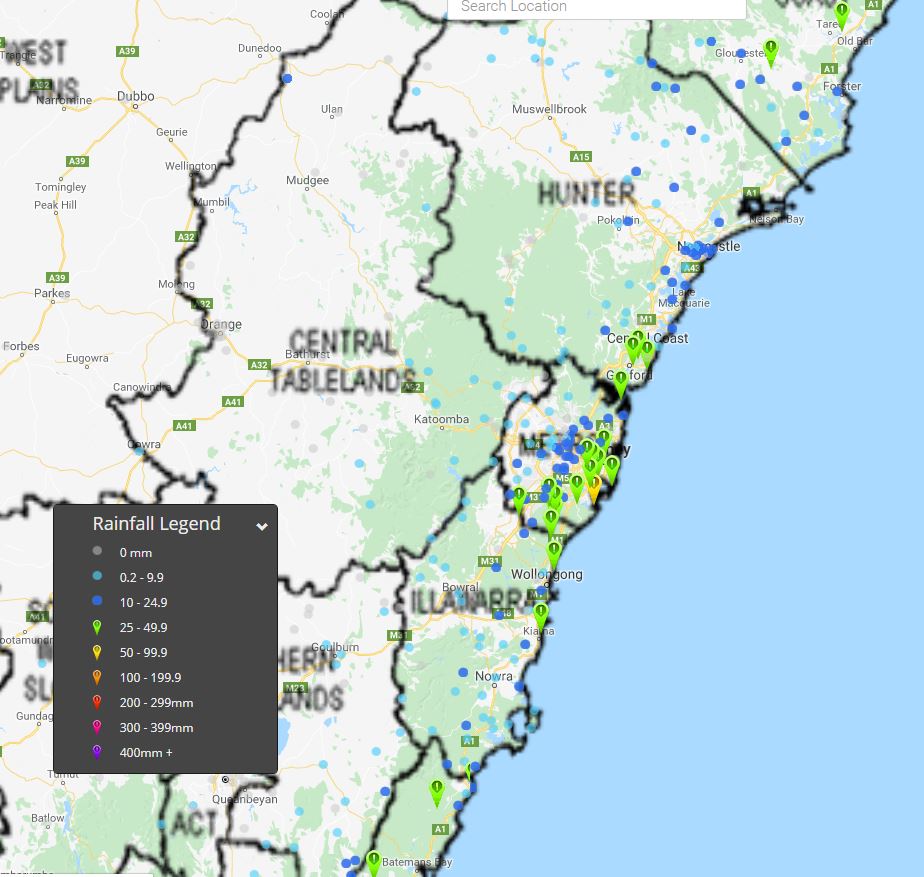 Heavy rain is about to soak parts of Western Australia?s Central-west, Gascoyne and Pilbara districts over the next few days, snapping the prolonged dry period and bringing the heaviest rain in years to some areas.

A low pressure trough (ahead of a cold front) that has been fed by moisture over the Indian Ocean will begin to move over the Central-West and Gascoyne from later tonight, before moving over the state?s northwest over the next few days.

Widespread totals of 30-to-60mm are likely over these regions, however some places are likely to see totals of 100-to-150mm, making it the best rain in years for some areas.

Whilst the ground is very dry, the hardened nature of the ground will make flash flooding more likely than usual, and despite the dry ground the rain is expected to cause riverine flooding in some catchments.

The rain will be very welcome, with many areas only seeing 25-50% of their average rainfall so far this year. Carnarvon had only collected a meagre 21mm to the end of May, well short of its average of 97mm. However, with 50-to-60mm expected over the next few days, the town can look forward to its best rain since March 2015.

The front behind this trough will also bring handy falls to southwest WA, with widespread totals of 20-to-50mm and the risk of damaging wind gusts tonight and on Tuesday. 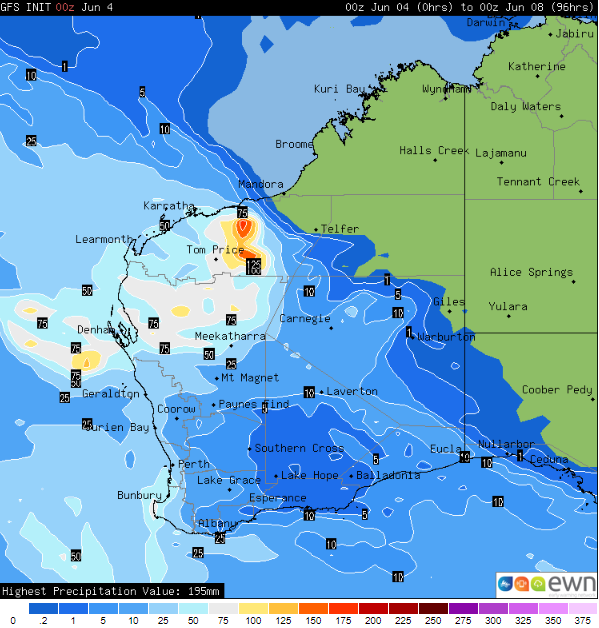