NSW Flood Watch: New South Wales Coastal River Catchments for the Lower Hunter to the South Coast and parts of the Central West

A surface trough and a developing East Coast Low is expected to bring heavy rainfall to central parts of the NSW coast from the Lower Hunter to the South Coast and parts of the Central West during the weekend and into Monday. This heavy rain may cause minor to moderate riverine flooding along parts of the Wollombi Brook, Central Coast, Greater Sydney, South Coast and Central West.
Major flooding is possible in the Hawkesbury Nepean Valley from Sunday, with minor flooding expected from late Saturday.

Water storages are near capacity.

Catchment soil moisture is average to wet along the NSW coast.

A Severe Weather Warning for Heavy Rainfall has been issued for the Metropolitan, Illawarra and parts of Hunter and Central Tablelands Forecast Districts.

The weather system is expected to cause riverine flooding for the catchments listed from Saturday. Flood Classes (minor, moderate, major) are only defined for catchments where the Bureau provides a flood warning service.

Flooding is no longer expected in the following catchments: Paterson and Williams Rivers, Goulburn and Upper Hunter Rivers. 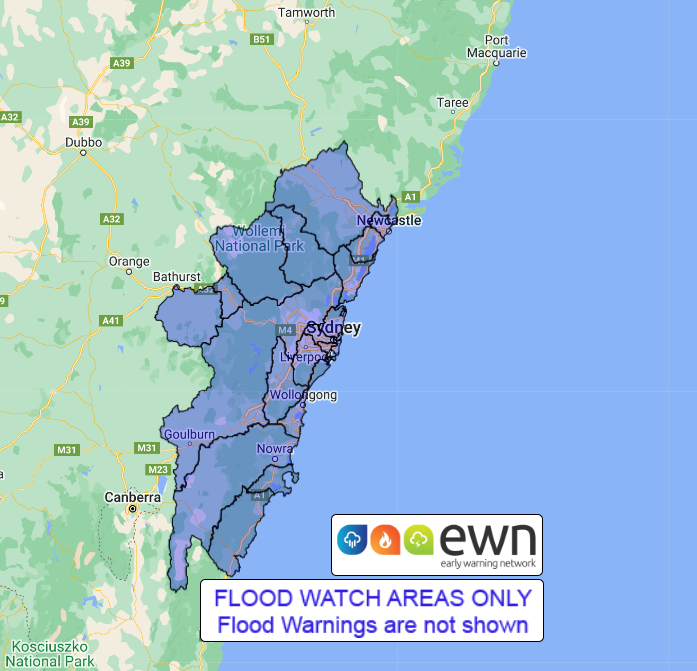