For people in Metropolitan, Illawarra and parts of Hunter and Central Tablelands Forecast Districts.

Issued at 8:36 am Sunday, 3 July 2022.
Heavy rainfall and locally damaging winds likely about central NSW on and east of the ranges.

Weather Situation:
An East Coast Low lies off the Mid North Coast of New South Wales and is directing humid air and areas of heavy rain across the central east of the state. This is likely to continue in parts of the central east throughout Sunday, and may continue through Monday as well as the low approaches the coast.

HEAVY RAINFALL which may lead to FLASH FLOODING is forecast to continue in the Illawarra, Sydney Metropolitan, Blue Mountains, Hunter (including Central Coast) districts today as the East Coast Low approaches the coast.
The heavy rainfall is expected to continue over the Sydney Metropolitan and Illawarra districts Monday.
Six-hourly rainfall totals between 70 to 120 mm are possible.

DAMAGING WINDS averaging 65 km/h with peak gusts in excess of 90 km/h are likely along the coastal fringe, most likely during Sunday afternoon and evening.
Heavy rainfall will further contribute to flooding already being experienced, and increases the potential for landslides. The damaging winds may lead to debris on roads and provides the risk for trees toppling in softer soils.

Various flood warnings and watches are current for catchments from the Lower Hunter to the South Coast and parts of the Central West, including some MODERATE to MAJOR flooding in some high population areas, so please refer to those flood warnings and heed the advice of authorities.
A Severe Weather Warning for Damaging Surf is also current along parts of the central coastline.
Locations which may be affected include Newcastle, Gosford, Cessnock, Maitland, Sydney, Penrith, Parramatta, Wollongong, Nowra, Bowral, Campbelltown, Katoomba and Lithgow.
Severe weather is no longer occurring in the Southern Tablelands district and the warning for this district is CANCELLED.

Since 9am Saturday morning the highest rainfall has been:
Brogers Creek 357mm
Wattamolla 318mm
Darkes Forest 297mm
Woronora Dam 270mm
Fitzroy Falls Dam 255mm
Robertson 253mm
A building at Corrimal sustained roof damage and partial collapse Saturday evening.
The State Emergency Service advises that people should:
* Move vehicles under cover or away from trees.
* Secure or put away loose items around your house, yard and balcony.
* Keep at least 8 metres away from fallen power lines or objects that may be energised, such as fences.
* Trees that have been damaged by fire are likely to be more unstable and more likely to fall.
* Report fallen power lines to either Ausgrid (131 388), Endeavour Energy (131 003), Essential Energy (132 080) or Evoenergy (131 093) as shown on your power bill.
* Don't drive, ride or walk through flood water.
* Keep clear of creeks and storm drains.
* If you are trapped by flash flooding, seek refuge in the highest available place and ring 000 if you need rescue.
* Be aware that run-off from rainfall in fire affected areas may behave differently and be more rapid. It may also contain debris such as ash, soil, trees and rocks.
* After bushfires, heavy rain and the loss of foliage can make the ground soft and heavy, leading to a greater chance of landslides.
* Stay vigilant and monitor conditions. Note that the landscape may have changed following bushfires.
* For emergency help in floods and storms, ring your local SES Unit on 132 500. 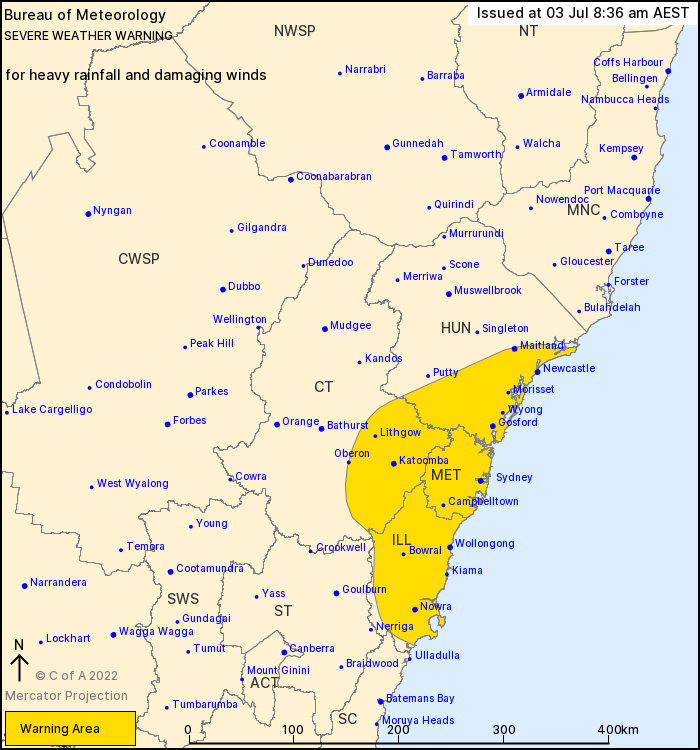