For people in Illawarra, South Coast and parts of Southern Tablelands and Snowy Mountains Forecast Districts.

Issued at 10:22 am Thursday, 6 May 2021.
POSSIBLE HEAVY RAIN AND GUSTY WINDS OVER THE SOUTH COAST, RANGES AND ILLAWARRA CONTINUING THURSDAY.

A low pressure system has developed within a deep coastal trough off the northern New South Wales coast. This low is forecast to track to the south over the next 24hrs bringing areas of heavy rainfall for the coast.

HEAVY RAINFALL which may lead to FLASH FLOODING is possible over the South Coast, Illawarra and adjacent ranges. Rainfall rates are expected to increase this afternoon before easing his evening.

Heavy rainfall will increase the risk of landslips and create hazardous driving conditions over this period.
Thunderstorms are also possible, and may produce locally heavy rainfall.

Locations which may be affected include Wollongong, Nowra, Bowral, Batemans Bay, Bega and Moruya Heads. 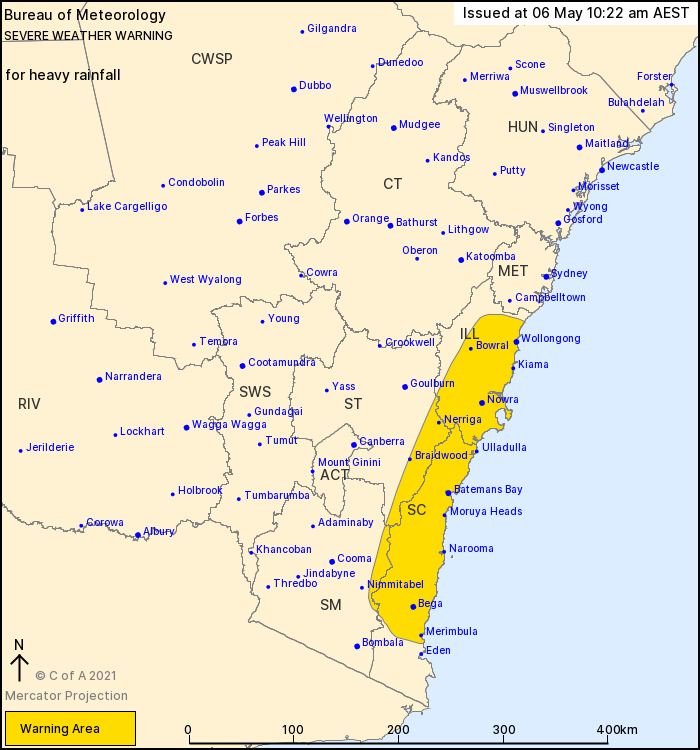