For people in parts of North Tropical Coast and Tablelands Forecast District.

Issued at 12:13 am Thursday, 18 February 2021.
PERSISTENT ONSHORE HEAVY RAINFALL ABOUT THE NORTH TROPICAL COAST MAY LEAD TO FLASH FLOODING.

Weather Situation: Strong onshore flow is carrying persistent rainfall on the North Tropical Coast as winds converge over the region. More broadly, a trough sits over the northern Cape York Peninsula and is connected to a tropical low in the Gulf of Carpentaria. Both are expected to remain fairly stationary but strengthen, leading to persistent convergence and onshore rainfall about the North Tropical Coasts today and tomorrow.
HEAVY RAINFALL which may lead to FLASH FLOODING is currently occurring between Innisfail and Hinchinbrook Island, and may extend north along the coast to Gordonvale early Thursday morning. 6 hourly rainfall totals of 150 to 250mm are expected.
Currently the radar/satellite indicates heavy rainfall is occurring about Tully and Mission Beach.

South Mission Beach has recorded 198mm in a 6 hour period to 11:05pm Wednesday, while Tully has recorded up to 158mm in 6 hours by 11:40pm.
Periods of HEAVY RAINFALL may continue about parts of the North Tropical Coast through Thursday and Friday.
A Minor Flood Warning for the Tully and Murray rivers is current, with a broader Flood Watch for the North Tropical Coast between Rollingstone and Cooktown.
Locations which may be affected include Mission Beach, Innisfail, Cardwell, Tully and Babinda.
South Mission Beach 198mm in 6 hours (11:05pm Wednesday) 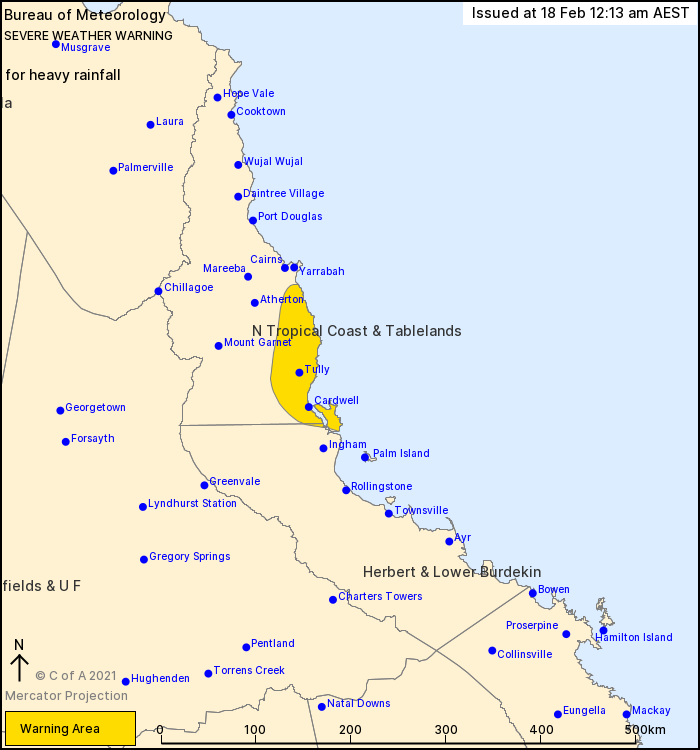