Headline:
Tropical low may produce gales about exposed parts of the north tropical coast as it develops into a tropical cyclone, most likely on Tuesday.

Movement: southwest at 15 kilometres per hour.

In the longer term, the system is expected to take a southeasterly track late in the week while remaining off the coast.

Hazards:
GALES are not expected during the next 24 hours, however GALES with gusts to 100km/h may develop about exposed coastal and island areas between Cape Flattery and Lucinda, including Cairns and Innisfail, on Tuesday morning depending on the movement and development of the system.

HEAVY RAINFALL may develop about coastal and island areas between Cape Flattery and Lucinda, including Cairns and Innisfail, over the next several days. A Flood Watch is current for the north tropical coast between Mission Beach and Rollingstone; refer to that product for more information.

ABNORMALLY HIGH TIDES are likely over the next several days. Large waves may produce flooding near the foreshore. People living in areas likely to be affected by this flooding should take measures to protect their property as much as possible and be prepared to help their neighbours.

Recommended Action:
People between Cape Flattery and Lucinda, including Port Dougles, Cairns, and Innisfail, should consider what action they will need to take if the cyclone threat increases.

- Information is available from your local government 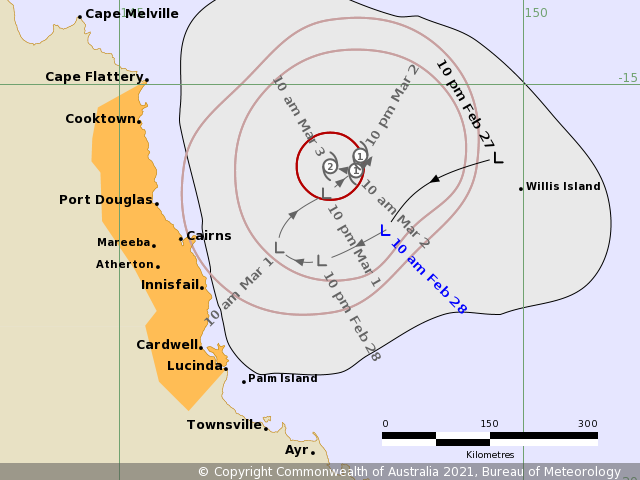