Weather Situation: A deep low pressure system centred off the Coorong coast will move eastwards to be over western Victoria later this evening.

Strong to damaging northwest to southwesterly winds, averaging 50-65 km/h with peak gusts of 90-100 km/h are forecast across the warning area, mainly with showers. Winds will gradually ease this afternoon, however gusty showers will continue overnight and during Friday.

Localised damaging wind gusts in excess of 90 km/h may occur with stronger showers or thunderstorms, mainly about coastal areas and parts of the Mount Lofty Ranges.

These conditions will cause sea levels to be significantly higher than indicated on tide tables today. Sea levels along parts of Spencer Gulf and Gulf St Vincent coastlines are likely to be at least half a metre higher than the highest astronomical tide of the year.

At the Outer Harbor tide gauge, the sea level is forecast to reach around 3.4 to 3.7 metres mid to late afternoon on Thursday. This may cause sea water flooding of low lying areas and localised beach erosion.

Several other locations across central districts, including the Mount Lofty Ranges, recorded gusts of around 80 km/h this morning

The State Emergency Service advises that people should:
* Move vehicles under cover or away from trees;
* Secure or put away loose items around your property.
* Don't drive, ride or walk through flood water;
* Stay indoors, away from windows, while conditions are severe. 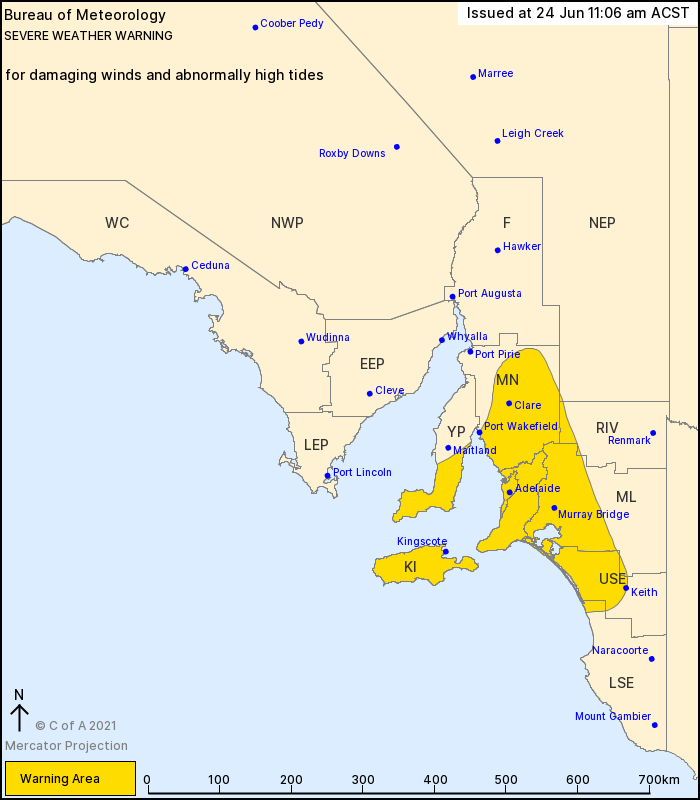