For people in parts of Goldfields, Eucla and South East Coastal districts.

Issued at 7:52 am Monday, 12 April 2021.
Damaging winds and heavy rainfall possible over southeastern parts of the State during Monday.

DAMAGING WINDS, averaging 60-70 km/h with peak gusts of 110 km/h being possible which could cause DAMAGE TO HOMES AND PROPERTY are expected close to the track of the low.
A period of HEAVY RAINFALL that may lead to FLASH FLOODING is also likely along the path of the low pressure system as it moves over southeastern parts of the State.
Further to the north and east of the system, strong and gusty north to northwesterly winds are expected during Monday with gusts to 90 km/h possible.
This is a rare weather event for people in southern and eastern parts of WA.

Locations which may be affected include Esperance, Kalgoorlie, Norseman, Balladonia, Eyre and Salmon Gums.

Severe weather is no longer occurring in the Great Southern and Central Wheat Belt districts and the warning for these districts is CANCELLED.
Southern Cross recorded a wind gust to 93 km/h at 4:30am Monday.
To see the forecast map track of the remnants of Seroja refer to http://www.bom.gov.au/products/IDW60281.shtml 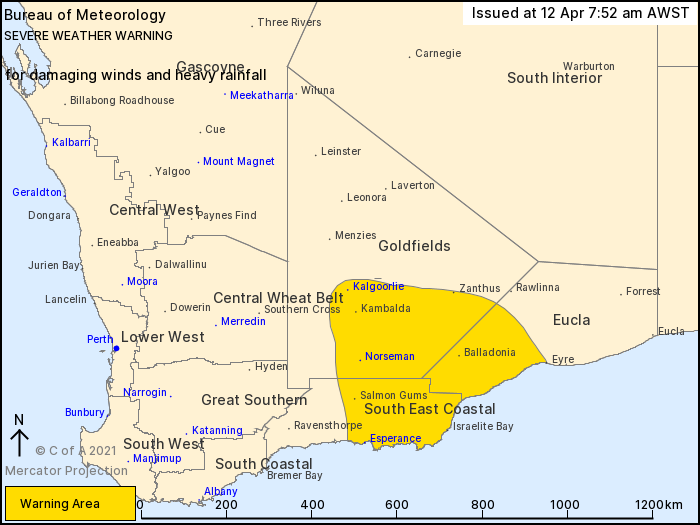