For people in Central West and parts of Lower West districts.

Weather Situation: At 4:00am WST Saturday 6 February, a tropical low was located approximately 100km southwest of Carnarvon. The low is expected to move southwards during the weekend while remaining offshore from the west coast, before passing close to the SW Capes on Monday morning.
It is not forecast to develop into a tropical cyclone however hazardous weather is still likely.
HEAVY RAINFALL is expected over the Central West during Saturday with daily totals between 30 to 50 millimetres and isolated falls up to 100 millimetres. The HEAVY RAINFALL should extend into the north of the Lower West during Saturday evening and Sunday morning.
Tides are also likely to be higher than expected over the weekend along the west coast, and may rise ABOVE THE NORMAL HIGH TIDE MARK with ROUGH SEAS and POTENTIAL FLOODING OF LOW-LYING COASTAL AREAS with the high tides on Saturday and Sunday evenings.
Flood Warnings are current for river catchments across the Kimberley, Pilbara and Gascoyne districts. Please refer to http://www.bom.gov.au/wa/warnings/ for further details.
Locations which may be affected include Geraldton, Kalbarri, Moora, Lancelin, Mullewa and Northampton.
Severe weather is no longer occurring in the Gascoyne district and the warning for this district is CANCELLED.

Widespread falls of 50-100mm with isolated heavier falls were recorded across western parts of the Gascoyne during Thursday and Friday. Some parts of the northern Central West have received about 25mm of rain in the past 6 hours. 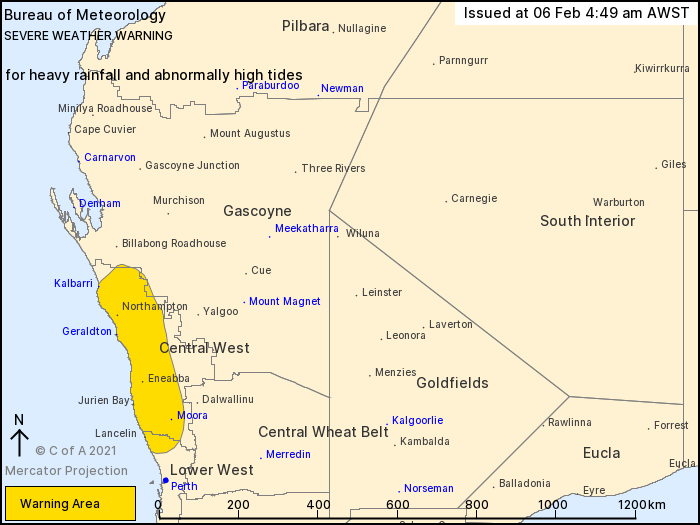