Headline:
Heavy rain and gusty winds for the Pilbara as a tropical low tracks close to
the coast. The system may develop into a tropical cyclone if it moves off the
coast.

The tropical low is over land and moving towards the west, taking it closer to
the Pilbara coast. It may move offshore late today or during Tuesday and
develop into a tropical cyclone. There remains the possibility that the system
tracks further south, remains over land and does not intensify into a tropical
cyclone. This would significantly decrease the chance of gales in coastal
communities.

Hazards:
HEAVY RAINFALL is expected in the central and eastern Pilbara today, extending
into the western Pilbara during Tuesday. Flood Watches and Warnings are
current, refer to http://www.bom.gov.au/wa/warnings/ for further information.

GALES with gusts to 100 km/h may develop in coastal areas between De Grey and
Dampier, including Port Hedland and Karratha, during today. GALES may then
extend west, past Dampier, to Onslow and Exmouth on Tuesday, most likely only
if the system moves over the ocean.

There is a slight risk of DESTRUCTIVE winds with gusts to 130 km/h on North
West Cape (including Exmouth) later on Tuesday or Wednesday, if the system
tracks off the coast and intensifies.

Tides will be higher than expected between De Grey and North West Cape.

Flooding impacts and squally winds will extend into the west Pilbara later
Monday and Tuesday regardless of whether the system tracks over land or over
the ocean.

Recommended Action:
DFES advises of the following community alerts (effective as of 6:00am AWST
Monday):

BLUE ALERT: People in or near communities between De Grey and Ningaloo,
including people in or near Port Hedland, Karratha, Dampier, Onslow and Exmouth
need to prepare for cyclonic weather and organise an emergency kit including
first aid kit, torch, portable radio, spare batteries, food and water.

Next Advice:
The next advice will be issued by 9:00 am AWST Monday 01 February.

A map showing the track of the cyclone is available at:
http://www.bom.gov.au/cyclone 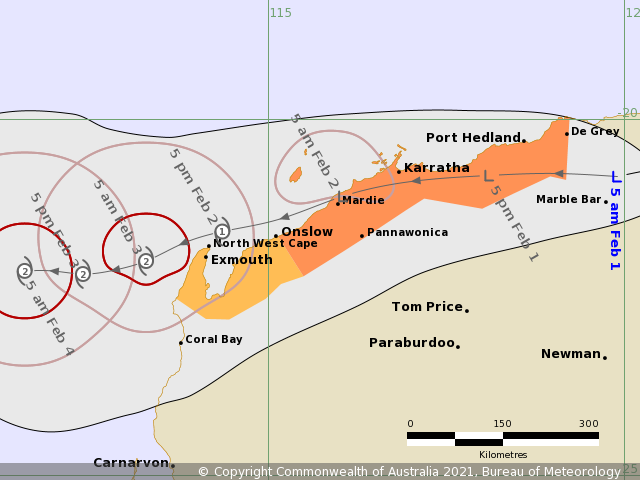