Australia summer outlook: Hot for most areas, wetter than average in the east, dry in the north and west

Several climate drivers will influence the summer conditions across the nation, notably an El Nino event and a positive Southern Annular Mode.

Development towards an El Nino in the tropical Pacific Ocean continues, with El Nino conditions expected to persist throughout summer. The good news is that El Nino typically has a weaker influence in drought affected southeastern Australia during summer, although it will still have an impact on the northern Australian wet season with drier than average conditions expected

The El Nino event will however still lead to a higher probability of hotter than average conditions, with most of the nation expected to see above average daytime and night time conditions.

The Southern Annular Mode (SAM), which controls the north-south shift in westerly winds across Antarctica, is also expected to play a role. During a positive SAM event, higher than average pressure develops south of Australia, which encourages onshore winds across southeastern Australia, and hence increasing the chances of rain events. However, this pattern can also lead to an increased likelihood of prolonged heatwaves across SA, VIC, TAS and southern NSW.

The positive Indian Ocean Dipole event, which generally causes decreased rainfall across large parts of the country, is expected to end by December and should not be a major influence during the Australian summer. 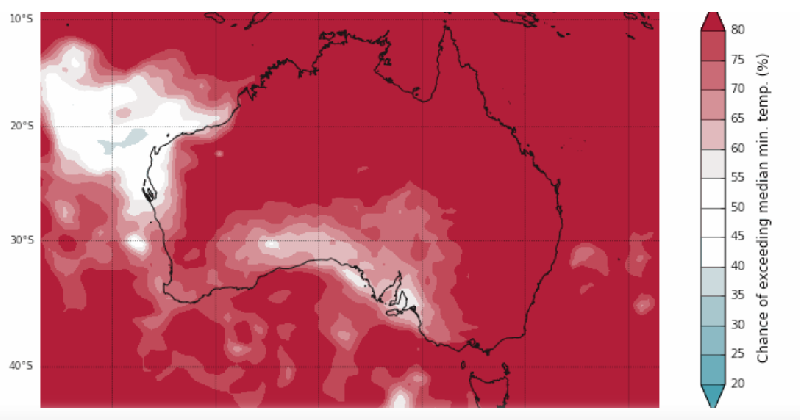